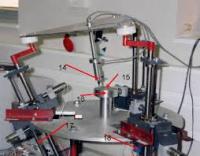 this club is going to help you to understand the kinematics of machines, we will also discuss the different types of mechanisms. it also provides the tips to groom your personality. just share your knowledge and help the others to learn and make the world develop.